I Need A Man, But I Won’t Interact With A Broke Man – BBNaija’s Khloe » 9JATOPFLAVER

Home » CELEBRITY GIST » I Need A Man, But I Won’t Interact With A Broke Man – BBNaija’s Khloe

I Need A Man, But I Won’t Interact With A Broke Man – BBNaija’s Khloe

Ex-BBNaija housemate, Khloe Abiri has opened up about the type of man she needs for a relationship.

The reality show star noted that she is not in for “childish games” as she would be turning 29 this year.

Khloe who disclosed that she needs a man that will love her for who she is, allow her express her feelings without getting pissed and also be a father figure to their children, added that she won’t be interacting with broke men.

Khloe further stated that though she might be called a gold-digger, people should also remember she is not broke and can afford all she wants. 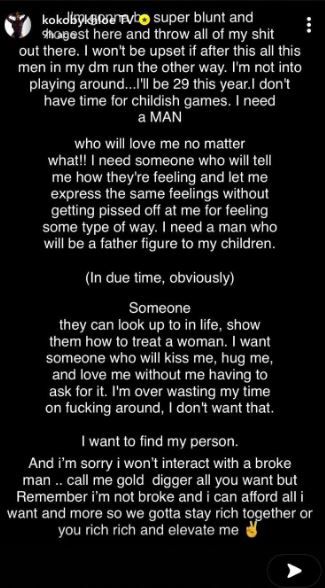