Posted by 9jatopflaver on October 1st, 2022, Under: CELEBRITY GIST

In less than a day after releasing his new album, the Marlian President has got to the top of the charts.

The street-hop singer’s debut album, ‘GTTB,’ is a 14-track project that features heavyweights such as Mayorkun, Zinoleesky, Mohbad, Lil Kesh, and a slew of others, and it’s already racking up the hits barely twenty-four hours after its release.

The project is an expression of Marley’s creativity and jolly-good vibes. He takes us into a sway of different sounds and catchy instrumentals with Rexxie, Niphkeys, etc on the beat.

The Project, which was released yesterday, May 30th 2022, is already the number one project on the Apple Music chart, which is widely regarded as the official chart for Nigerian music due to its massive audience. 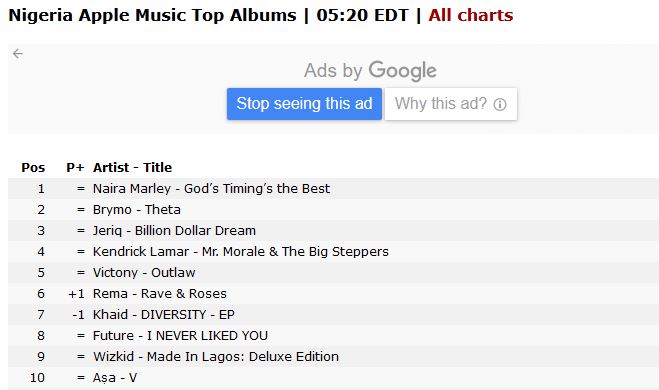 9JATOPFLAVER is not responsible for the content of external sites.