The Insatiable Greed for Power, Money & Sex in the Lives of Stark Illiterate Chief Chris Uba and Sen. Stella Oduah is about to Consume these two LoveBirds and PDP IN GENERAL IN ANAMBRA STATE.

It will be recalled that in the aftermath of the recently concluded Anambra National Assembly Primaries Elections where Messrs SoOopuluuchukwu and EwepuUdike both of Orumba North & South abruptly ended the exercise with Their Thugs fighting and Series of Gunshots scattering the seemingly innocently concocted “so called delegates’ …….. A lot of CankerWorms have been opened and all cupboards have been thrown open with all manner of Skeletons falling out.

Chief Chris Uba is the same Blood Sucking Vampire that organized for Gov. Wikéëę to come and Insult his own Brother Peter Obi, in their home state – Anambra, and felt no remorse about it, all because he desperately wanted to be handed over the Power Structure of the PDP in Anambra State to enable him, a pure Stark Illiterate who cannot even read or write his name – run for the office of a Senator that requires astute Mental cohesion, constant Logical expression in Clear unambiguous English and extempöré eloquent elucidations.

A group of aggrieved persons who claim they not only paid Chief Chris Uba money to assist them secure the party’s primary election tickets in the south, but also went to various lengths in securing the Conviction of some Senatorial Co-aspirants like Chief Chuma of Ihiala, in other to get them disqualified from the Senate race, have now come to the conclusion that this beast called Chief Chris Uba will go to any length to attain Power, Money and Free Sexcapeds as he is Notoriously known for from seeming helpless political female office aspirants.

They have enumerated how they were threatened and blackmailed into using a Federal High Court Judge of the FCT whom he asked them to communicate with through one of the female Registrar of the court by name – Mrs Adamma Ode to secure and pay for the Court Judgement convicting some of his Co-Aspirants. This Adamma Ode is a long standing girlfriend of Chief Chris Uba whom he uses to do his dirty Legal bidding in most court rooms and is ‘Supposed to be a Registrar of the FCT High Court’ who also is currently serving in Justice A’s court and was currently dating Justice H. Questions abound as to her Marital status and Mental Health.

It is no longer in doubt that Chief Uba’s stock in trade is to sleep with Married women, blackmail, set them up then dump them after using them for his Vices. The dirty celebrated crisis between him and Hon Nkeiruka Onyejeocha led to her – evicting her husband from their matrimonial home, and when Mazi Onyejeocha wanted to fight back Chief Uba over the adulterous relationship he was savoring with his wife, Unknown arsonists were sent to his factory to go and burn down his business and only manufacturing industry site he ever owned, thereby leaving him at the mercy of the Jezebel he married for a wife. Unknown to Hon. Nkeiruka, Chief Chris Uba was also fucking and sleeping with Sen. Stella Oduah, who was the Aviation Minister at that time, (as well as also Sleeping with Senator Uche Ekwunife who is representing Anambra Central – Whom he openly lays claims to her daughters as his) A DNA test may be able to prove or disprove these his assertions to Chief Larry Ekwunife whenever he so Wishes to venture for the answers to these Claims.

it was in the wake of all these matrimonial crisis that when Hon. Nkeiruka found out about Chief Chris Uba’s Love affair with Sen. Stella Oduah and Sen. Uche Ekwunife that she angrily and personally chaired the committee that indicted Sen. Stella Oduah and truncated her removal for Fraud as a serving Minister of the Federal Republic. It was all borne out of a hatred for the broken home Chief Uba caused her and subsequent love affair with the Aviation Minister. Hon. Nkeiruka used her position as Chairman – House Committee on Aviation to personally unleash her Venom on Sen. Stella Oduah for all the numerous domestic scandals between her and her numerous lovers (Chief Chris Uba topping the list) she was trying so hard to conceal.

Recently the nest has been stirred again, as the usual greed for Power, Money & Sex has reared its Ugly head again in Anambra. This time around – the GrapeVine has it on Authentic information that Justice H and Justice A whom dealings with Mrs Adamma Ode have been petitioned to the NJC over video taped evidence and WhatsApp pic images of how they transact and pay for Judgements against any perceived Political Opponent and other matters relating to Oil Wells. Unfortunately this time around because one of the gang Members of Chief Chris UBA and Sen. Stella Oduah has been ShortChanged in the recently concluded Anambra PDP Primary Elections, birds like Evangelist Linus Ukachukwu have started singing “Discordant Corroborated Tunes”. He now feels short changed after assisting to secure Criminal conviction on some aspirants and yet None of his bargaining agreements were met leaving him in the cold with no National Assembly Candidate.

In the just Concluded Primary Elections, Chief Chris Uba and his Lady Lover – Sen. Stella Oduah in conjunction with Hon. Lynda Ikpeazu – single handedly frustrated all other aspirants in the Anambra North and South Regions by Hijacking the Elections and writing the DSS & INEC reports alongside the PDP Party results at his residential house Situate at T.Y Danjuma – Asokoro. His long-standing girlfriend at INEC, A certain Mrs OdyyyBaby can also attest to this. This they were able to achieve in conjunction with Alh. Umar Bature who gave them PDP Party materials. This Alh. Bature is the Governorship aspirant whom Sen. Stella Oduah bought a series of Brand new Lexus Bullet proof Jeeps for and it was delivered to his Private Office at No. 3 Batna & Agadez – Wuse II Abuja. The Outbursts and revelations are now coming in the wake of Disqualification of Chief Valentine Ozigbo, Dr. Obinna Uzoh, Criminal Conviction of Rt. Hon. Chuma Nzeribe, Disqualification of Hon. Tony Nwoye, Dr Obiora Chira, Barr. JohnMary Akachukwu Mmadukolam, and also the subsequent denial to give Evangelist Linus Ukachukwu’s preferred Aspirants their party Tickets as earlier agreed to by their entire gang, thereby shortchanging him his own cookie crumbs and leaving him with nothing after all.

It is not quite sure how Hon. Nkeiruka Onyejeocha will rear her Ugly head again this time to fight her LoverBoy – Chief Chris Uba over the recent Love entanglements with Sen. Stella Oduah, as we also gathered that after being in the National Assembly for 4Consecutive terms totaling a period of 20years, apart from the 8years she had served in Abia State as a Councillor and a Commissioner (totaling almost 30yrs in governance).
Now the good non-Cocaine smoking right thinking people of IsiiiKwuato & UmunneOchi have decided that it’s time O’Clock for the youth to also try their hands in the National Assembly. So she may be very well engrossed in battling for her own return seat to the NASS – National Assembly and press ignore to Sen Stella Oduah and her Lover boy Chief Chris Uba.

MeanWhile Stella Oduah like the Proverbial “Black Widow Spider” is known for her use and dump attributes – From Rear Cmmdre Mike Akhigbe to Chief Ogienmwonyi, to Alh Umar Bature and Chief Iyorchia Iyu, and a host of all others, including her latest prey – Chief Chris Uba, She will always have her way, Sleeping through every difficult terms and discarding the men afterwards when there is no more use for them.

However Most of the Short changed Aspirants in the Anambra PDP North & South Zones have wowed to Work with Evangelist Linus Ukachukwu in exposing all the deals of Sen. Oduah and Chief Uba even as they have Sworn that these two Criminal elements may not only be brought to book but will never see the Final conclusion of these PDP Primary Election Process. Most of them have subsequently all dumped the party and have mostly joined the Peter OBI Winners Labour Party and have mostly all been given Party Nomination Tickets.

The group thereby Warns Alh Umar Bature to Vomit all the Dollars and Vehicle gifts received from these Trio of CHIEF CHRIS UBA, SEN.STELLA ODUAH & EVANGELIST LINUS UKACHUKWU and conduct Fresh elections as was ordered in Ebonyi, Imo, Enugu and even Lagos States recently. If the Anambra Elections are not cancelled and Transparently Re-Conducted, We envisage that a Landslide doom defeat awaits the Stark illiterate Chief Chris Ubah and his LadyLover Stella Oduah and all their Cohorts.

In this day and Era of Pious Transparent Leadership in the person of Sir Peter OBI (Okwuüteé Ndi Igbo) – God Forbid that Anambra will be given to Principalities and Strongholds to come and govern Us. May We all rise Up and Say No to this Charade by Eeëselu Chief Chris Uba and Senator Stella Oduah and their numerous Cohorts. 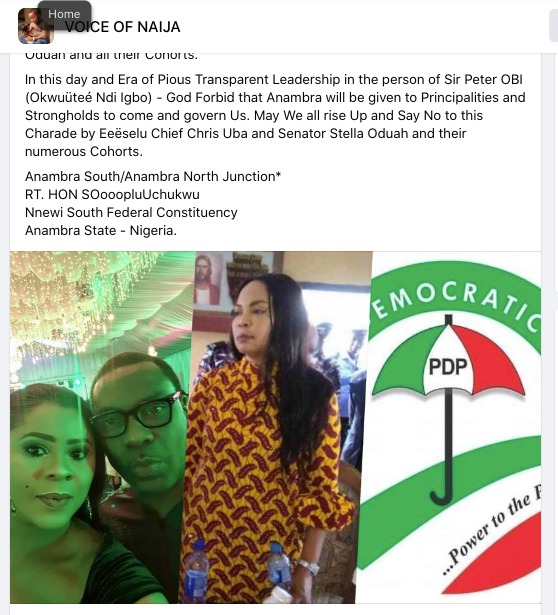 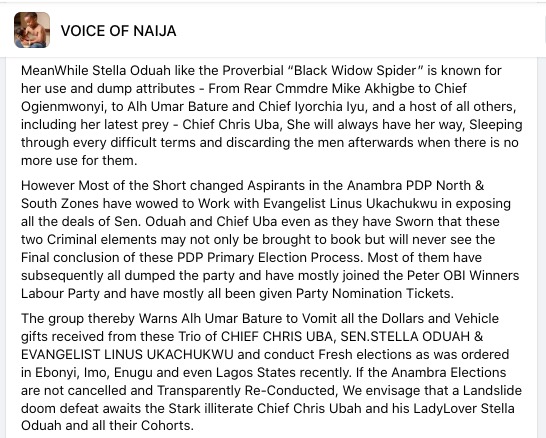 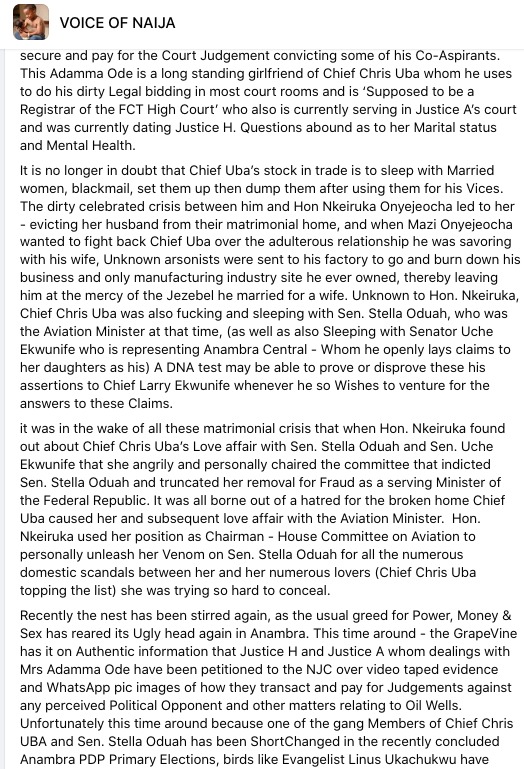 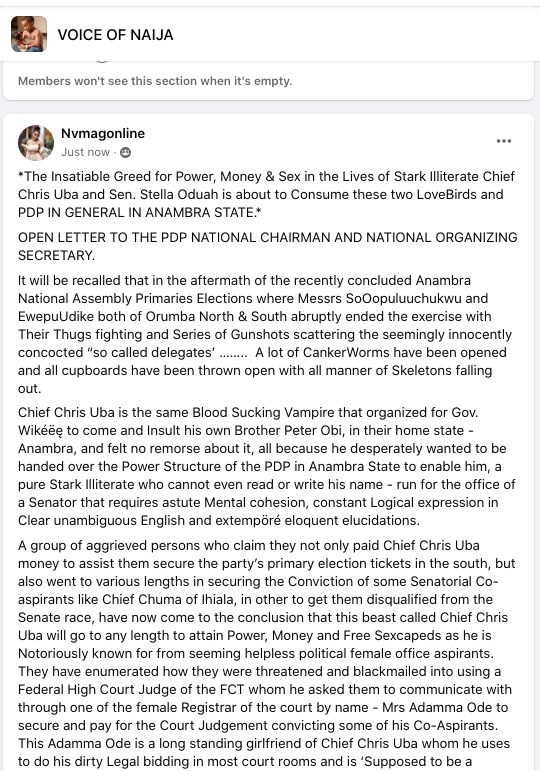 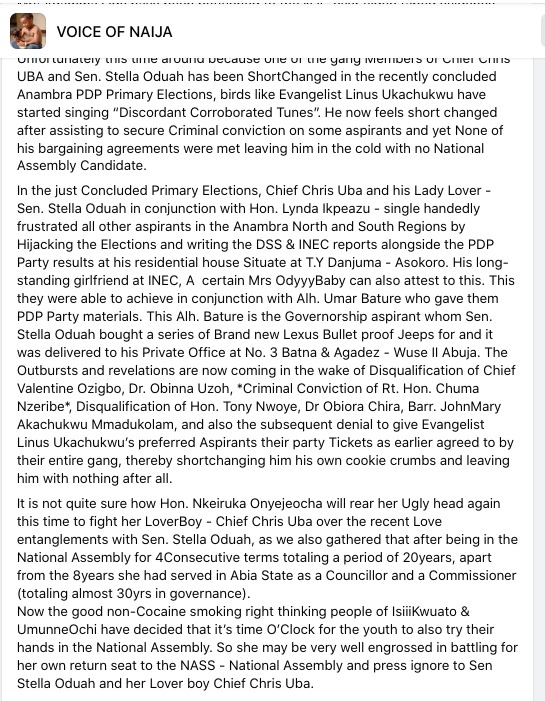