Omah Lay has joined the trending hot conversation as he slams Ruger for stating that he is better than BNXN.

Recall 9jatopflaver  had earlier reported that Ruger stirred reactions after his response to a fan who claimed BNXN is better than him. Read Here 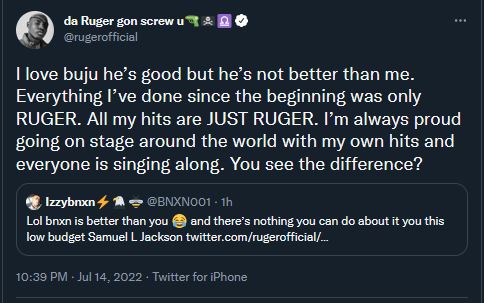 While Ruger’s response has attracted a lot of attention from fans, Omah Lay joined the vawulence by sharing his two cents on the issue.

He slammed Ruger for comparing himself to BNXN, claiming that people like the jonzing artist will say anything for clout.

He also took a dig at Victony for quoting his tweet about being Nigeria’s best songwriter. He implied that both Victony and Ruger are kids.